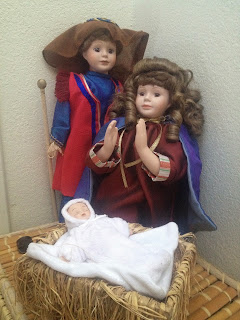 Last week, I was asked to speak at a women's Christmas event.  It was meant to be an outreach to women in the community who might come to celebrate the season in a lovely location, whereas they might not make it through the doors of church.  I've done this event before, and thoroughly enjoyed it.  I always love sharing about Jesus.

HoWeVeR! This night, I struggled.  I shared everything I went to share.  My message was OK.  My take-away was clear.  The mechanics were just a mess.  I went with an object lesson.  It worked well at home.  I envisioned a podium.  I planned on a head-set or a lapel mic.  I figured my hands would be free.  The object lesson was the first part of the message.  Everything, from that moment on, hinged on the smoothness (sort of) and the transition of that example. There was no podium, not even a place for my Bible (I had to put everything on the floor and bend up and down getting my things).  The mic was a hand-held, and having only one hand available was a HUGE problem for this object lesson, which included unwrapping a package.  To say the object lesson did not work well is an understatement, during which I probably lost 90% of the audience.  The worst part of that whole moment came when I dropped baby Jesus (he was in the box I unwrapped).  Yep!  I dropped him.  I heard a few snickers in the audience (that helped bring back a few of the 90% lost), and I felt like someone had hit me in the chest with a 2 x 4. So, I bungled my way through the rest of the painful 20 minutes.  Again, I said everything I went to say.  We talked about the promises of Christmas.  We discussed how every promise of Christmas was wrapped up in the Names of Jesus.  One little baby with a multitude of names.  A baby so mysterious and majestic that one name could not, would not, do.  We looked at two names in particular.  Two names that calmed Joseph's fears and led him to take Mary as his wife, and to raise Jesus as his own.  We talked about how those two names, Jesus and Immanuel, were promises enough for me.  I had the privilege of sharing my story, which began at Christmas when a messenger from God (an angel?) explained my need of a Savior, and how that Savior would be God-with-me forever, if I just let him consume my heart, and gave him my all.  What a joyous moment of life-change for me! I became a Saul-turned-Paul, only no one gave me a new name.  Unquestionably and without doubt, that story (those promises) changed me FoReVeR.  HoWeVeR!  I had dropped Jesus.  I just couldn't get past that moment…and it colored the whole evening.

On Tuesday (following Friday night's mess), I laughingly (that was good therapy) told a couple of friends over lunch how I had dropped Jesus.  At that moment, the Lord gave me a new look at that Christmas message, an inspired look.  Don't we all drop Jesus?  Sometimes we drop him in the middle of the Christmas season (or before it actually begins).  Jesus gets dropped in the midst of preparations and shopping, crowds and present-wrapping, food-making and parties, decorations and hubbub, and hoopla!  Sometimes we actually manage to make it through the holiday season focusing on that babe, reflecting on his mission, and responding to it with heart-felt desire, then as soon as the nativity scenes and the decorations are boxed up for another year, we drop him.  Sometimes the Christ-child is totally left out of the "X"mas season, and the holiness of Christmas simply becomes "Happy Holidays"…  Yes, don't we all "drop Jesus," at one time or another…????????

That was what I really went to say to those ladies, but didn't quite get it out at that time in the middle of my embarrassment of an object-lesson-gone-awry.  I can say it now.  We all tend to drop Jesus (fortunately he didn't, and doesn't, break).  This Christmas, let's make it a point to pick him up and allow his birth and his purpose on earth to meaningfully impact us for all eternity…

P.S.  Secretly (or not so secretly) and sincerely, I want to be an angel like the one who came to me almost 40 Christmases ago.  (What a messenger! What a gift I was given!) Maybe I can be if I can hold onto Jesus without dropping him!
Posted by Peg at 5:26 AM