A Lesser Known Lady with Great Faith...and a Lesson for a New Year! 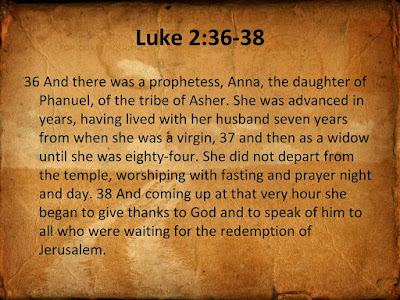 It's an unlikely New Year's Eve passage, the one above... 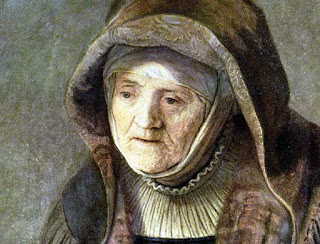 She's one of the handful of people who recognized JESUS at infancy.

I am intrigued by these three verses, where God wrote Anna's biography to inspire us...

Not at first read, maybe...but;

it's obvious, the Almighty uniquely set apart her life for this one moment in history.

...AND, I find Anna's story startlingly ApPrOpRiAtE as a New Year dawns;

As I contemplated this brief account, the Lord gave me a WORD (well, let's make this plural, a few "words") with which to enter 2021.

I'm always curious as I await a New Year how He will challenge me to live in the next season.

More so with 2020 running down to a close with the new-year-clock. 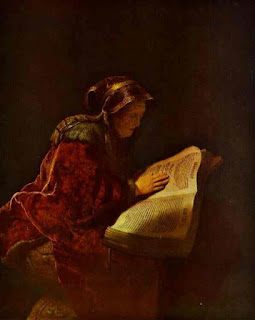 The Holy Spirit, through Dr. Luke's pen, sums up all of Anna's earthly years right here in verses 36-38.

Actually, that's a lot of ink for a New Testament woman! 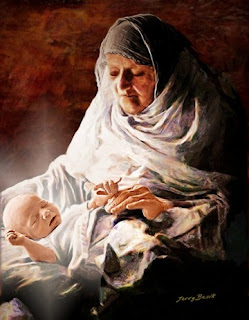 (Anna the Prophetess, by Jerry Bacik)

Here's what we know about Anna:

1) The Jewish community knew her as a prophetess. Anna inspired and encouraged others with the words the Lord placed on her heart. Her mouth was her ministry, and she wasn't afraid to speak the words of the Lord. She often spoke of hidden-things, things revealed to her, either by inspiration, or birthed in dreams and visions (Olive Tree Enhanced Strong's Dictionary: prophetis). Anna was a truth-teller, not necessarily a future-teller. Yet, here, Anna's prophecy shows up in the giving of thanks, as she proclaimed to those who were in the temple that day, "Here is the Redemption of Israel! Wait for Him NO MORE!" Anna's boldness in being God's mouthpiece is exactly how people described her (just as Luke did). They knew her to point others to the hope of their future redemption! Anna always looked forward knowing her Redeemer was nigh... Imagine her JOY when she knew she had no further to look!! 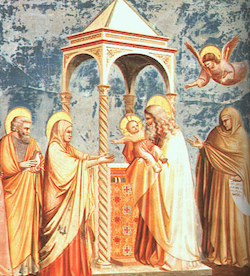 (Anna the Prophetess, in brown on the right, depicted at Jesus' dedication, author unknown)

2) We know the name of Anna's dad: Phanuel (this is the Greek form of the Hebrew name Peniel, meaning "the face of God.") Perhaps her father had a story to tell, like Jacob in Genesis 32, where he, too saw the face of God and lived to talk about it. I find this random fact interesting, since Anna herself comes face to face with God (God-the-Son held in the arms of his earthly mother).  This moment in time presented Anna her Phanuel-moment! The Lord honored Anna's faithfulness by revealing Himself to her. Years ago I was told that God honors those who honor Him. Anna's story is a testimony to that little platitude.

3) Anna arose out of the little known Northern Tribe of Asher. Asher is often called The Lost Tribe, because most of the people from Asher were assimilated into Syria when the Northern Kingdom was taken captive. Very few of them returned to Israel....but Anna did. This one little fact assures us that Anna was a survivor. Whatever life threw at her, Anna made the most of it (see point #4, too). 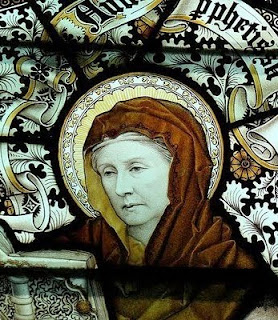 (Icon of Anna the Prophetess, at the Basilica, where her remains are held)

4)  Anna was widowed at a very young age. Probably married as most girls were around the age of 14, by 21 her husband had passed away, possibly leaving her childless. At this point, she had either lived another 84 years following his death (which made her about 105 according to most commentaries)...or she was 84. Fact is, she was old and had been focused on her ministry a long time.  Instead of looking for another husband to fulfill her, Anna chose a life of dedication to the Lord. Because she was a known prophetess, she probably had a room along the outside walls of the temple (rooms were reserved for temple priests, prophets, and other assigned workers). Hers would have been a hard existence as a woman dwelling in a man's world. But, day and night, she stayed in the temple living out her calling...purposely focused...looking forward never backward with regret or remorse.

5) One last thing that has to do with Anna's "forward-focus." Anna filled her time with worship, prayer, and fasting. Anna did the hard work of a life committed to her Lord... Yet, this I know, when the Lord, Himself, has been the sustainer of a soul (as He was for Anna - widowed, barren, undoubtedly poor, living a meager existence in the temple), these things - worship, prayer, and fasting - are a source of Great Peace to the GIVER. 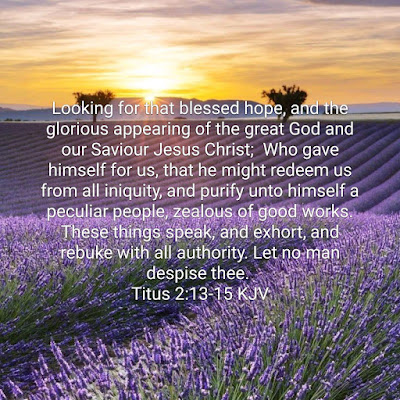 In Anna, I see a life of contentment and peace no matter the situation surrounding her.

...speak truth and encourage hope in others; to live as an overcomer (no matter what 2021 may throw at us, welcome the obstacles as opportunities for presenting Jesus); fulfill God’s purpose; stay forward-focused; re-commit to trusting the Lord fully; and always point others to the Savior...until His face I see! 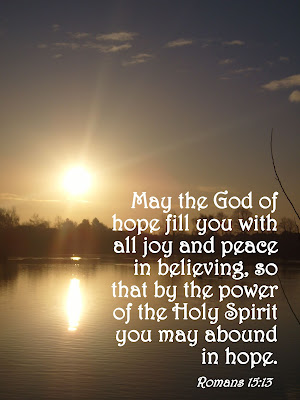 One day, we will see Him face to face, and like Anna, will give thanks to God for His remarkable gift of grace!

Who knows, maybe my life (and yours) is uniquely set apart for such a moment in history???

How will people describe us?

I'd like to be known as Anna was known; to be as faithful as Anna, always forward-focused, looking and waiting for my future redemption....